Today’s column was intended to be a Q&A — and it will come, eventually. However, delving into the Power Five-Group of Five schism possible amid COVID-19 and other such interesting yet ultimately frivolous topics on this day feels tone deaf. Perhaps I could stick to sports as some in our society lustily demand, but silence when one has an available platform is its own inherently political position — especially in sports.

Early Friday morning Eastern Time — as the Minneapolis riots raged in response to George Floyd’s death, the initial inaction in dealing with Derek Chauvin, and the use of tear gas and rubber bullets on Tuesday night before the protests turned destructive — Donald Trump tweeted “when the looting starts, the shooting starts.”

Were the fiery images of the riots not enough of a parallel to the Civil Rights demonstrations of the late 1960s and early 1970s, the president’s kerosene-soaked tweet implicitly calls to mind the murder of students at Kent State in 1970 while explicitly quoting former Miami police chief Walter A. Headley.

The riots in Miami’s Liberty City neighborhood may seem like a lifetime ago. The images of that era are in grainy black-and-white, and were obviously no livestreams to preserve. By and large, what we’re left with our words — words like those the president quoted, and words like the below from the Miami Herald in 1968. 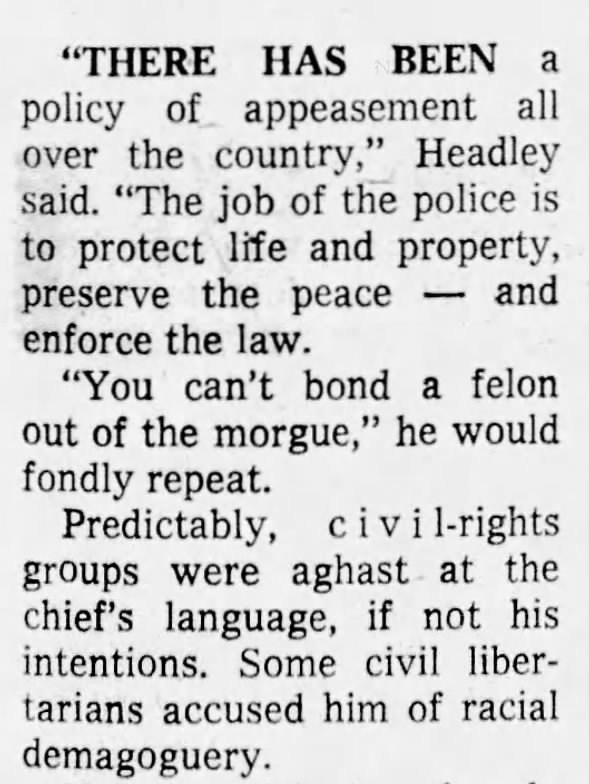 And yet, such moments are hardly ancient history. The Liberty City riots occurred just 15 years before I was born. The same staggering realization strikes me whenever I research the integration of sports in America, particularly college football, as I had been earlier this week for another project. We love to glorify the moments of triumph against the backdrop of the Civil Rights Movement, and rightfully so: Texas Western’s all-black starting five winning the 1966 NCAA Tournament and the integration of high school football in Alabama are worth celebrating.

These instances remind us sports can be a great unifier. It’s a lot more uncomfortable to dig into the moments with less uplifting endings.

In the same city just 16 years prior, the Orange Bowl blocked an integrated University of San Francisco team from participant with its full roster, a move that ostensibly killed off the program. Only five years before the Liberty City riots, white students at Ole Miss rioted in retaliation to the university’s admission of James Meredith.

Two years after the Liberty City riots, in the Sunshine State, Florida A&M played the University of Tampa in a landmark game. Samuel G. Freedman chronicled the meeting between the HBCU A&M and predominantly white Tampa last November on the 50-year anniversary. Participants in that game are in their late 60s and early 70s today. Again, this isn’t ancient history we’re dealing with.

Likewise, the cultural issues that bubbled around these historically significant sporting events haven’t been solved. In many ways, some of our attitudes are exactly the same. Tommie Smith and John Carlos solemnly lifting gloved fists on the medal stand at the 1968 Olympic Games, in the middle of the Civil Rights Movement and mere months after the assassination of Dr. Martin Luther King, was met with condemnation of “black-skinned storm troopers” from Brent Musburger.

In 2016, Colin Kaepernick kneeling — a wholly passive gesture amid the chorus of then-Candidate Trump’s increasingly racist campaign rhetoric — garnered and continues to generate widespread criticism. Kaepernick’s actions were misinterpreted, sometimes willfully, less often not, as disrespectful or threatening in the same vein as Smith’s and Carlos’. Such reactions are emotional knee-jerks to uncomfortable conversations and a refusal to listen.

Sport is, in many ways, the only available conduit to begin such conversation. While I won’t estimate a percentage, I can say from my own experiences growing up in an almost exclusively white community that a not-insignificant portion of people get their only exposure to other cultures and races through sports and entertainment. Silencing these voices is thus an inherently political position.

I referenced The Running Man in a commentary on Patreon earlier this year in regard to FOX’s transparently political apolitical presentation of the Super Bowl. While invoking a campy sci-fi actioneer from the ’80s when addressing the gravely important historical moment in which we’re in is admittedly ham-fisted, a line from that film captures why treating sports purely as escapism has dire consequences.

Look, it is a contact sport, right? Yes, but you see, you guys at Justice. You cannot have it both ways. You want ratings. You want people in front of the television instead of picket lines. Well, you’re not gonna get that with re-runs of Gilligan’s Island.

With pro sports being deemed “essential” during COVID-19 quarantining and the ongoing attempts to coerce Major League Baseball into action, all while Americans riot, the sentiment feels especially prescient.